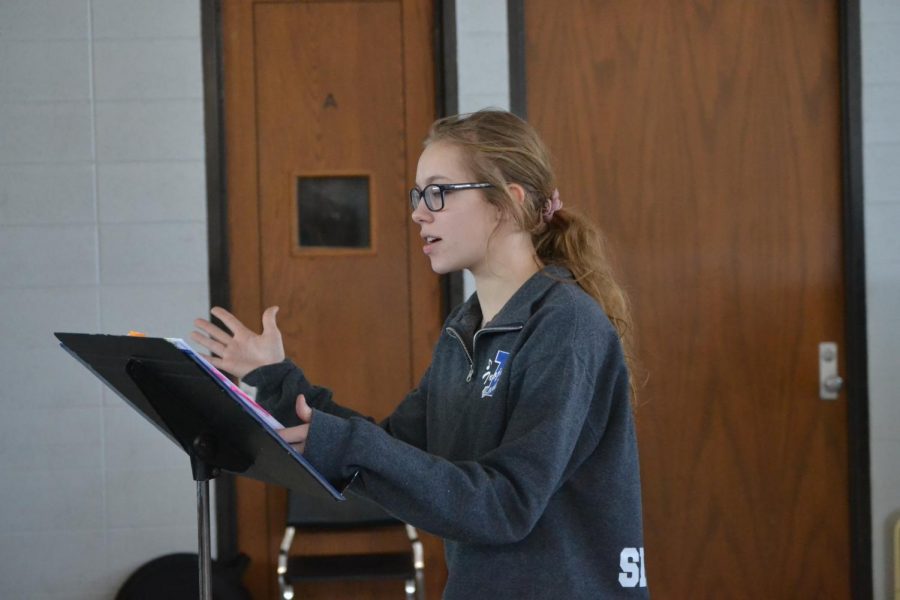 Gallery|3 Photos
Marissa Shoemaker
junior Jada Siebeneck rehearses on March 2020 for her role as “Belle” in Beauty and the Beast.

Covid-19 has had a huge impact on many things at FHS and performing arts is one of them. The first performance of the spring musical, Beauty and the Beast, was just a week away when Governor Mike DeWine announced the closure of schools for three weeks.

“I was devastated to hear that we wouldn’t be able to perform because we all worked really hard on learning the songs and choreography” sophomore Stephanie Hartford said.
Hartford was a chorus member of the musical last year. She says that the musical being postponed was a real disappointment and that she was extremely sad about it because of how much time was put into the production.

“When Mr. Cantrell told us that we would be postponing the musical, I thought that it was just going to be a couple weeks or a month, not for another year!” Hartford said.

Stephanie Hartford believes that no one could have thought that any of this would happen so she never imagined that Beauty and the Beast would be pushed back this far. She says that it was disappointing when it was announced that the musical would be pushed all the way back to the spring of 2021.

“The virus continues, we have flattened the curve, but it remains dangerous,” Governor Mike DeWine said.

This was said on April 20, 2020 when it was announced that schools would be closed for the remainder of the 2019-2020 school year. This would mean that the cast would not be able to perform Beauty and the Beast until the following school year.

“I was upset when I heard that we couldn’t do the musical that school year but I was happy that we would be able to do it the next school year,” Hartford said.

“Choir is very different than how it was in other years. We haven’t really sung and it has mainly been paperwork and watching videos,” junior Katherine Armstrong said.

Armstrong is in the Symphonic Choir and talks about what the class looks like. She says that their chairs are distanced far apart in order to meet social distancing requirements. Everyday in choir in previous years, students sang but this year, there is barely any singing being done because of the masks and other Covid precautions.

All performing arts are very different from how they have been before and are struggling through this due to guidelines and many other factors.

If you want a picture to show with your comment, go get a gravatar.