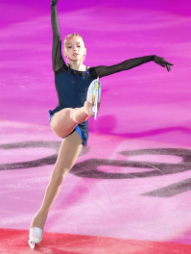 Olympic figure skater Kamila Valieva, 15, was found with traces of three substances used to aid blood flow to the heart in her system amidst her competing at the 2022 Beijing Winter Olympics. These substances are also often used for performance enhancing, one of them (trimetazidine) even being banned by global antidoping organizations,

Despite the findings, the Russian skater was cleared to continue skating through the entire duration of the Olympics. Although she is able to skate, Valieva nor anyone skating alongside her will be awarded with an Olympic medal if she is on the podium.

“Her fellow competitors should not have to face the disappointment of not receiving their rightful medals due to her situation,” says Scarlet Smith, a freshman and a figure skater of 10 years.

New information from the case had the International Olympic Committee telling reporters that the traces of trimetazidine in Valieva’s bloodstream could have been a result of contamination from her grandfather’s heart medicine. He had been taking Valieva to practice daily as well as staying with her in her home.

“Kamila is very young, and the situation behind her trial is extremely unique. I think that’s the reason why the lines of her punishment are blurred,” Smith says.
Despite having submitted her test in December of 2021, officials have only just now learned of the positive test. The controversy surrounding Kamila Valieva has struck up many other questions, specifically concerning the age of Olympic competitors. Should there be a minimum age to be able to perform in the games? Should there be more limitations for competitors who are minors?

“I think that the younger the athletes are, the more open they are to falling victim to performance enhancing drugs and also mental trauma from intense training,” Smith says. While Kamila Valieva’s case is unique in nature, it poses the same set of questions pondered by officials and consumers of sports media for a very long time. What limit are certain things regarding medication acceptable, and where does it cross the line?