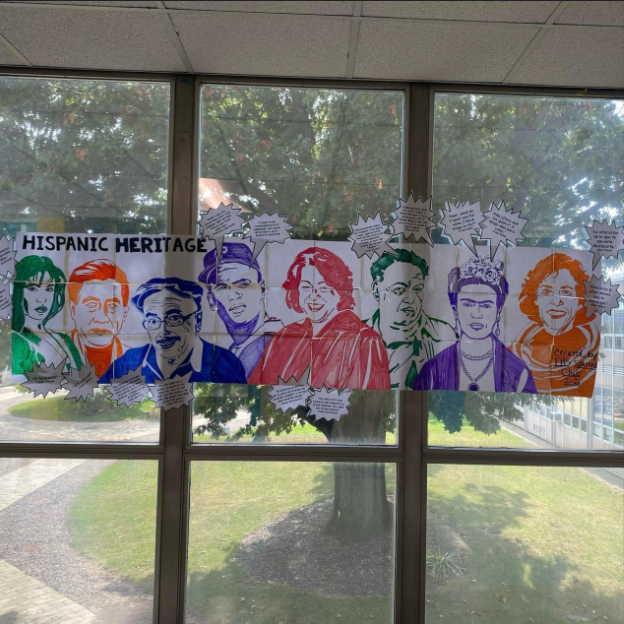 Hispanic Heritage Month mural in the language hallway at FHS

Hispanic Heritage month takes place from September 15 to October 15 and it is meant to celebrate and recognize achievements of those of Hispanic heritage.

The celebration has not always been celebrated as a month. In 1968, Hispanic Heritage week was made official in the United States by President Lyndon Johnson. The week began on September 15. This specific week was chosen due to the Independence days of multiple Latin American countries including Costa Rica, El Salvador, Guatemala, Honduras, Nicaragua, Mexico, and Chile.

Celebrations of the month typically include festivals, art galleries, and other gatherings. At the beginning of Hispanic Heritage month of 2021, President Joe Biden released his thoughts.

“We see it in every aspect of our national life: on our television and movie screens, in the music that moves our feet, and in the foods we enjoy,” Biden said.

Biden began by recognizing those that we celebrate who have an impact on our societies entertainment and culture.

“Our communities are represented by Hispanic elected officials, and our children are taught by Hispanic teachers,” Biden continued.

In his statement, he includes the aspect that the month is not strictly for those holding fame or power but also for those who directly impact communities such as teachers and friends. Biden leaves off by praising the dreams and ambitions of those in our communities and hopes for further Hispanic impact in the future.

The Spanish classes at FHS have also begun to celebrate the month.

“One thing is that we have the hallway decorations in the world language hallway which has people that are famous or well known that have contributed to society,” Spanish teacher Sra Storey said.

Storey explains the new visuals around the school including the hallway decorations and the Hispanic Heritage month mural by Spanish Club soon to be put up. The Culture and Communications class has also hung up decorations in the library.

“I’ve also noticed there are posters around the hallways. I don’t know who hung them up but they’re really cool,” Storey noted.

The posters are hung up in front of the main office and in the freshman wing. They contain information about the month and how to celebrate it.

“In Spanish four honors we are learning a song called Latino America. Spanish three honors has not started yet but they will be talking about different people and contributions to our society,” Storey said.

Storey comments that other Spanish classes are also doing other activities to celebrate and inform. She then speaks on how people in general can celebrate.

“I would say first and foremost, recognize that Hispanic Heritage Month is not just about people that are maybe famous or well known,” Storey said.

Storey stresses that the month is for any Spanish speaker or people of Hispanic heritage.